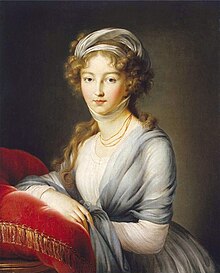 Unless you have been living under a rock for several weeks, you will most likely be aware that the royal wedding of Prince Harry and Meghan Markle takes place today at Windsor. Throughout this period I have tried to pay the least amount of attention to all this as possible, not because I am a republican (I am not), but because every time a royal event takes place news organisations can’t seem to find anything better to cover.

Despite my efforts to ignore the royal wedding, I have capitulated and have decided to write something on this blog about a royal wedding – namely the wedding in 1792 between Russian Grand Duke Alexander Pavlovich and his bride, Princess Louise of Baden. The post will also cover, as briefly as possible, the trajectory of their relationship, which turned out on the whole to be an unhappy one.

In the 1790s, Empress Catherine the Great was approaching the final years of his life. She had a frosty relationship with her own son Paul, and placed great hopes on her beloved grandson, Grand Duke Alexander Pavlovich. In 1792 Alexander was fifteen and Catherine decided it was time to find him a bride. She found one in the form of Princess Louise of Baden, a thirteen year old princess from a small German principality.

Catherine invited Louise and her younger sister Frederica to St Petersburg in 1792. Although both of them were shy and reserved, the young couple soon fell passionately in love with each other. Observers at court remarked on the beauty and youth of the young pair and the Empress described them as Amor (Cupid) and Psyche. The court poet Gavrila Derzhavin wrote an ode ‘Amor and Psyche’ dedicated to Alexander and Louise. They were engaged in May 1793, with the wedding scheduled for September, and neither bride nor groom could wait.

As was the tradition for foreign princesses marrying into the Russian imperial household, Louise converted to Russian Orthodoxy and took the name Elizaveta Alexeevna. The initial years of the marriage were happy, but Elizaveta felt uncomfortable among the court intrigue that was ubiquitous in St Petersburg. Catherine was disappointed that the young couple did not produce a son before she died in 1796.

Increasingly, Alexander and Elizaveta grew further apart. The Grand Duke began a fifteen year affair with Countess Maria Naryshkina, while the Grand Duchess had an affair with Prince Adam Czartoryski, a close friend of Alexander’s. In 1799 she gave birth to a daughter named Maria Alexandrovna. This dark-haired child born to two light-haired parents led some to question the Grand Duke’s paternity. When the young child died in 1800, Alexander and Elizaveta drew closer in their grief. Czartoryski, meanwhile, was dismissed from court, though he would soon return to Petersburg during Alexander’s reign.

During the reign of her husband from 1801-1825, Empress Elizaveta was often overshadowed by her mother-in-law Maria Fyodorovna, who held a higher rank at court. This was the cause of much jealousy as Elizaveta could not take her place alongside her husband Tsar Alexander during imperial processions. A second daughter was born to the couple in 1806, but she too died young after a mere fifteen months. During the Napoleonic Wars, she stayed at home while Alexander joined his army on campaign, though she did accompany him to the Congress of Vienna in 1814.

It was only by the 1820s that the imperial couple drew closer again. In 1822 Alexander’s beloved illegitimate daughter Natalia died at the age of sixteen. The Tsar was inconsolable and it was only through the efforts of his wife that he managed to revive his spirits. The middle-couple seemed to have rediscovered the affection they displayed towards each other in the youth, thirty years before.

By this time, however, Empress Elizaveta’s health was in serious decline. She suffered from a lung condition and was advised by doctors to seek rest in a temperate climate. In 1825, she resolved to make a journey to southern Russia, accompanied by the Tsar. A modest mansion was furnished for the imperial couple in the southern port city of Taganrog, where they arrived on 5 October.

In the warm skies by the Black Sea, the couple rekindled the love of their youth. Both of them wrote letters to acquaintances noting their rediscovered happiness. This blissful period lasted little more than a month. On 17 November, the Tsar returned from military inspections in Crimea and caught a cold, which developed into typhus. He grew ever weaker and died in the arms of his empress days later. Elizaveta was in no position to accompany her husband’s remains back to St Petersburg for the funeral. She eventually embarked on a journey back to Petersburg in May 1826, but died of heart failure on the way. Elizaveta had dutifully stood beside her husband for more than thirty years, despite all the difficulties she faced. With his death and without any children, she was left on her own.